In which Jane Seymour wears an enormous sock bun, and Lacey Chabert makes a hoagie.

Chabert plays Emily Taylor, a humble seamstress from Philly (as described by my PVR). She’s so humble, in fact, that I didn’t learn her name until 18 minutes into the movie. She lives with her best friend Toni, the only black character in the movie, whose sole purpose seems to be encouraging and consoling Emily, as she has zero back story worth mentioning. They work at Emily’s father’s tailoring shop. But these people don’t really matter, because she’s dating a dude named Leo.

“Leo James” is like a diet Jude Law. Jude Law Lite. I suspect the actor, who’s actually from Belfast, watched The Holiday over and over again in preparation for his role of soft-spoken hunky lead. Emily and Leo have been dating for less than a year, and are planning to spend their first Christmas together. How special. Exposition time: Leo’s just received his MBA (not important), and Emily’s an aspiring fashion designer (pretty important). Throughout the movie, it’s played like her job as a seamstress is unseemly, but it’s okay because she’s striving for something better, you guys! It’s gross and classist.

Leo takes Emily out to a fancy restaurant to drop the big news: he’s a prince. Not just a prince, but Prince Leopold of “Cordinia,” a sovereign state in the south of France. The movie apparently immediately forgets this, because everyone either speaks with English or eastern European accents (it was filmed in Romania).  Leo is being summoned home for Christmas, and asks Emily to join him. She accepts in shock, and just leaves her divorced father alone on Christmas without a second thought.

In the land of Cordinia, Emily meets Leo’s mom: Jane Seymour, known as Queen Isadora. She’s a major B to Emily, probably because Emily wore a sparkly beanie to meet her for the first time. When Emily’s finally escorted to her room – which is far, far away from Leo’s – Queen Isadora takes the time to point out the obvious:

She reminds him that he is supposed to marry Natasha, his childhood friend/old flame. He’s all, “But Moooooooom, I don’t wanna!” and that’s basically it. We see that Emily, a COMMONER, has started to befriend her maid, Olivia. Dinner time! Queen Izzy serves up some piping hot haggis to Emily, who LOVES IT, and I’m not sure if she’s faking to spite the queen or genuinely likes it. Leo tours Emily around the castle (it boasts 118 rooms, which seems apt; Buckingham Palace has almost 800) and shows her how to fence and waltz. The castle staff watch and murmur about how they seem so in love.

There’s a montage where Leo and Emily try to make the expressionless guards laugh, much to their avail. They do this twice in the movie, and YET, there is no scene where they actually succeed in cracking a smile. If you can make a montage out of it, I want a pay-off! Meanwhile, Queen Izzy is complaining to her sassy butler dude, Victor, that Emily’s not good enough for her son. Victor disapproves of Izzy’s meddling ways; he wants Leo to marry for love. Queen Izzy mentions that she married her late husband, the king, due to an arrangement, but that their relationship grew affectionate over time. They share a moment.

The two lovebirds go into town to see the market, with Leo in sunglasses and a ball cap to disguise himself, but no security. I’m pretty sure that this would never happen. They stop at an orphanage that’s selling Christmas trees to raise money. Emily bonds with the cute orphan, Poppy, right away. When she finds out Poppy’s an orphan, she tries to relate, using the fact that she grew up without a mom. Um, you had a super great dad that loved you and gave you a damn job. Do not even, Emily. Leo’s feeling charitable, so he’s like, “I’ll buy them all!” (the trees, not the orphans) and suddenly a crowd gathers because their prince – who’s been MIA for the last four years, I’m presuming – is just hanging out with an American, buying trees.

Back in the Castle of Love,  Queen Izzy enters, wearing the largest sock bun I’ve ever seen. It is breathtaking. Oooh, here comes Natasha! Queen Izzy took it upon herself to invite her over. Natasha, a duchess, spends the entire scene reminiscing about the good old times with Leo, and Emily gets upset. There’s no time for tears though, because this royal fam is about to hold a  fancy dinner! Of course, Leo took no time at all to prepare his girlfriend for this, or really anything to do with etiquette or royalty, so Emily’s left to bumble by herself.

Heinous acts she commits during said dinner:
– drinks from the “hand bowl”
– wears a homemade dress
– asks the barren baroness if she has any children (everyone gasps)

After this dinner disaster, Queen Izzy and Natasha conspire to have her and Leo spend more quality time together. This can only mean one thing: coordinated horse rides! The three of them trot off, wearing matching red riding jackets, leaving poor Emily alone in the castle on Christmas Eve. Leo has given absolutely no thought to any of this. Emily wanders around for a bit until she discovers the staff playing cards in the kitchen. She joins them in decorating a little Christmas tree. She’s just like them!

Galina, the barren baronness, invites Emily to go Christmas shopping. The two of them meet Little Orphan Poppy along the way, who charms Galina in approximately five minutes. Is the orphanage using Poppy for child labour? All of a sudden, a benediction parade with Leo and Queen Izzy ride by. The queen notes that there’s not as many people out to greet them, and Leo suggests that it’s because they are considered stuffy and boring. Queen Izzy asks if he wants to ride out on a skateboard with a backwards cap, and that was the only time I chuckled at this movie.

Everyone’s getting ready for the big Christmas Day ball. The queen gives Emily a gift: her own Christmas engagement dress from decades past. It’s old and dusty pink and obviously meant as a SABOTAGE to looking good. Emily takes the dress, and then begs Victor, the sassy butler, to help her learn etiquette lessons ASAP. We find out that Leo plans to propose at the ball! Emily has only hours to fix this dress! Can she do it all?

Emily gets her big grand staircase entrance, of course. She has Pretty in Pinked this dress into a strapless affair with a crazy diamond appliqued bodice. Does the castle have a craft room ready to be used for these purposes? I’m positive the queen didn’t approve you totally destroying her personal property, EMILY. Everyone’s dazzled by her manners (thanks, Victor!). We see that Galina and her husband have invited Poppy to the ball, and are in talks to adopt her, obviously.

At some point, Leo and Natasha waltz together. Emily is mortified and disappears into the staff kitchen. When Queen Izzy comes in, she discovers Emily teaching the staff the art of making hoagies. This is a royal Christmas ball! People need their canapes! I’m totally on the queen’s side with this, but then she goes and fires two of them, including Emily’s maid BFF, Olivia.

Leo finds Emily in her room, packing for home. He proposes anyway. Obviously, Queen Izzy overhears their entire conversation. Emily rejects his proposal, knowing the queen will never accept her, and leaves Cordinia. After she leaves, the queen tells Leo that before she married the king, she had fallen in love with a commoner. But WHO?! However, they had been forbidden to marry, and he returned to a life of service! AND HIS NAME RHYMES WITH RICHTER! As the queen starts to reevaluate her life choices, Victor tells her that he’s re-hired the two staff members. She agrees. She’s changing!

Back in Philly, home of the hoagie and humble seamstresses, Emily is sad about everything. Before she has time to ask Toni or her dad how they’ve been doing, she spots Leo standing outside in the street. He proposes again to her, yadda yadda, and then the queen pops up in a limo to apologize and give her stamp of approval. Emily says yes, and doesn’t start thinking about how this is going to work logistically. Bye forever to her only friend and family member, I guess.

WEDDING DAY. They get married in an ugly church on the castle grounds. When they kiss outside, snow falls (apparently, it hasn’t snowed in Cordinia in 40 years, and so this is Very Special). Oh yeah, Queen Izzy and Victor are totally in love now, and the baron/baroness have officially adopted child labourer Poppy.

AND THEY NEVER GOT THE GUARDS TO LAUGH! 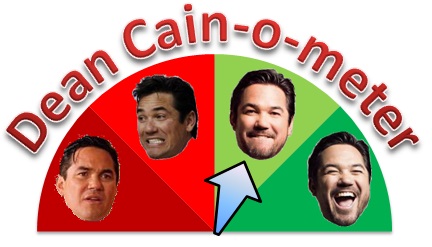 Inoffensive at best, this movie was just a very milquetoast re-imagining of The Prince and Me, which was also bland and forgettable.

The concern I have is that the Hallmark movies have loud, annoying, incessant “bing-bong” music that overpowers the voices of the actors. There should be no music while there is speaking

Laurie swears. A lot. Foul language abounds. If you hate cussin’, this ain’t the place for you, Brenda.

It’s come to our attention that Dean Cain, the face of our movie ranking system, is a ride-or-die Trump supporter. We want to make it undeniably clear that we don’t fuck with Trump, his horrific policies, beliefs, or attitudes towards basically everyone, but specifically Black women and men, POC, Muslims, immigrants, and the LGBTQ+ community. This is us fully denouncing Cain until we find a suitable replacement.  Thanks for understanding.