I hated this movie. Melissa Joan Hart’s shrieking quirks were like splinters under my fingernails for the entire movie, and watching Mario Lopez act is like staring into a coiffed vacuum cleaner. Every single character is awful. Let’s get started!

We’ve got problems in the opening scene already. MJH – known by most as Clarissa or Sabrina, but we’ll call her Trudie here – is supposed to be a diner waitress that can’t find or hold a steady, well-paying job. And yet, she manages to pay for a massive loft in the city by herself.   Trudie’s got a successful and overbearing family, and she’s stressed about bringing her wealthy boyfriend Nick home for Christmas to meet them.

She over-perms her hair temporarily (is this a thing? Who is home-perming their hair?), so she looks insane. After blowing an office job interview set up by her dad (this is just embarrassing), she goes to her waitress job at a diner. Her co-worker friend shows her some old musket that the diner owner keeps around, even though that’s probably illegal and definitely scary, but now we have Chekhov’s gun. Her handsome and wealthy boyfriend Nick waltzes in and promptly dumps Trudie at her place of work right before Christmas, which is super mean, but it’s not hard to see why. She starts panicking about looking like a loser/failure in front of her family (probably too late for that, Trudes), and then spots Mario Lopez sitting at a table. He’s waiting for his girlfriend, to whom he is about to PROPOSE. In a DINER. When you find out that he’s dating some hoity-toity rich princess, it makes even less sense that Mario Lopez – David, to the viewers – would propose in such a greasy spoon.

Trudie finds her moment and corners David in the back, Chekhov’s musket in hand, and forces him outside. David slips on a patch of ice in the parking lot and knocks himself out. Even though the diner was packed, nobody apparently sees Trudie drag his muscular body to her car and put him inside. Her grand plan is to kidnap Dimples here, and force him to pose as her now ex-boyfriend Nick, just for the holidays. Aren’t the diner staff worried that Trudie left without a trace? Or her customers? She could’ve been kidnapped for all they know! Does this happen a lot to her? How does she still hold a job?

Once David comes to, they’re already on the road and he’s basically hogtied with pantyhose. He accuses her of being a “hairy, man-hating lady” because this director clearly has a vendetta against females. Trudie explains that she needs a fake boyfriend for the holidays, so her family will get off her back. I guess the craaaaazy alternative would’ve been to just show up and say, “My boyfriend just dumped me, and I’m a little upset right now.”

They stop for gas, and David tries to get the gas station owner’s attention. The owner’s suspicious when he sees the pantyhose cuffs, but Trudie’s perm wins him over when she tells him it’s for some roleplay or kink. The owner comes running out of the station… to give her a pair of pink furry handcuffs. He winks at her, and David just stares out the window in despair. For the sake of the recap, I’m going to just put ignore all the times that David had a clear chance to escape Trudie’s perm.

To make things worse for him, Trudie’s family has rented an old log cabin in the middle of nowhere. The nearest gas station is 20 miles away. Trudie gathers her family together, and explains that “Nick” finds it hilarious to pretend he’s been kidnapped by her, and so they should all play along. She lets David in the house, and everyone just laughs at him when he tries to plead for help! The dad is the worst of the bunch, because he tells David he’s surprised to see him with Trudie because they “thought she liked the innies, not the outies.” Oh my GOD, burn this entire log cabin down with everyone inside.

Trudie’s obviously the black sheep of the family, and her family totally hangs her out to dry in front of her alleged boyfriend constantly. Nick/David keeps trying to escape (very poorly) but finally relents when he realizes it’s pointless. Trudie begs him once more to play along, for her sake (why would he ever do that?), but he finally agrees…so he can get even. He turns the trickery around on her and starts playing up the great boyfriend role, so that when the holidays are over, she has to admit that things “didn’t work out” with Nick. He even ramps it up and PROPOSES TO HER, which feels a touch too harsh, but she also kidnapped a stranger during the holidays, so I’m actually cool with this move.

Meanwhile, David has managed to sneak a phone call to his almost-fiancée, who only starts searching for him once she finds out he was about to propose. Holiday in Handcuffs hates women.

In a completely unsurprising twist, David starts to see why Trudie kidnapped him in the first place: her family is shitty and horrible. To be fair, her siblings seem all-American bland, but her dad especially puts a lot of pressure on her to be successful. David finds a book of Trudie’s art, which her family thinks is weird and freaky, but obviously David realizes she’s an Artiste! They bond over the fact that David secretly wanted to be an architect, but since it was unrealistic, had given up on his dream of owning his own firm/studio. David defends her art to her parents, and then there’s some weird skating montage where he forces her to skate for him on the backyard pond, which is impeccably lit. They share some heartfelt moments, of which I don’t remember any.

We now come to Christmas dinner. There were a few hints thrown around during the movie that the mom is sick of the dad’s bullshit (hurray!), but now it all comes to a head. In quick succession, Trudie’s hot sister reveals that she spent her law school tuition on her own Pilates studio instead. Then Trudie’s hot brother reveals he’s G-A-Y and not actually engaged to a girl, but dating a DUDE! The dad is basically about to load up his shotgun because his life is over with failures for children and a shrew for a wife, but then! Police bust in the room to arrest EVERYBODY because they’ve finally tracked down the kidnappee, David.

They all go to jail, and David reunites with his materialistic girlfriend. Trudie’s family all turn on her for being a certifiable crazy person, and she just peaces out after realizing that David dropped all the charges.

Fast-forward a few months. Trudie sees the engagement announcement in the newspaper for David and his fiancée, and we’re supposed to feel sad that these star-crossed lovers just can’t make it work, despite a kidnapping! On the day of David’s wedding, Trudie goes to an art show that features one of her pieces. She’s excited and proud, until she finds out that her now de-closeted brother has invited her entire family against her wishes. But it’s boring because they are all totally normal and supportive of her now. She realizes her parents are working through the dad’s bullshit with counseling (boo, leave him!), and everything’s cool-de-la now. To top off her bittersweet day, she finds out her art piece has been sold to an unknown bidder.

THE MYSTERY IS KILLING ME.

Oh wait, it was David. In a super fun twist, HE kidnaps HER! He takes her to some studio that is decked out, floor to ceiling, with twinkly lights (this explains where most of the movie’s budget went). He’s taken her advice and gone solo with his own architecture/art studio. I’m not obviously in the biz, but I don’t think this type of studio actually exists. Best of all: his first art installation is the piece that sold at her show! And he’s broken off the engagement with his fiancée! He’s obviously in love with this home-perming nutjob now. He might even have proposed to her at the end, but I was too busy screaming at the TV to remember. 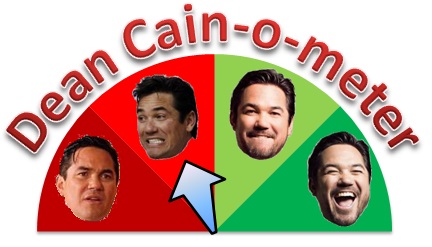 Hear me out. This movie was almost entirely awful, yes. But I think the beautiful log cabin setting has me under its enthrall, because it made me feel a little bit cozy. I am ashamed of myself.

Yeah, for a second the Stockholm Syndrome connection crossed my mind, then I thought, “Hey, it’s Mario Lopez. . . who cares.”

Laurie swears. A lot. Foul language abounds. If you hate cussin’, this ain’t the place for you, Brenda.

It’s come to our attention that Dean Cain, the face of our movie ranking system, is a ride-or-die Trump supporter. We want to make it undeniably clear that we don’t fuck with Trump, his horrific policies, beliefs, or attitudes towards basically everyone, but specifically Black women and men, POC, Muslims, immigrants, and the LGBTQ+ community. This is us fully denouncing Cain until we find a suitable replacement.  Thanks for understanding.